What Problems Can Birds Cause?

Birds can be a problem pest for both businesses and homeowners. These problems can range from simply being annoying to extremely costly and dangerous, so it’s a good idea to know what you’re up against when it comes to bird control.

Wherever birds go, they’ll leave droppings behind. This doesn’t just look disgusting, but it also poses some serious health risks, too. For one, bird poo is a slip hazard when wet, meaning pavements and pathways can become dangerous when it rains. It’s also a hygiene risk, as bird droppings can contain any number of bacteria, viruses, and parasites.

All of these problems are the reason companies and councils spend thousands on cleaning up bird poo every month, but it’s much better to deter birds from leaving their mess altogether. The only way to do this is to keep birds away from your property.

Another problem caused by bird droppings is corrosion. Bird poo breaks down into salt and ammonia very quickly, especially when wet. This means it’ll eat away at almost any surface if you leave it. Paint, concrete, metal, you name it – they’re all at risk! However, the one kind of material that is particularly vulnerable is tar-based roofing. You should naturally try and keep birds away from your roof if at all possible!

Corrosion can quickly lead to discolouration and severe structural damage, but this is far from the only way birds can damage your property! Birds such as pigeons are surprisingly heavy, so they can easily dislodge roof tiles or damage guttering in large flocks. 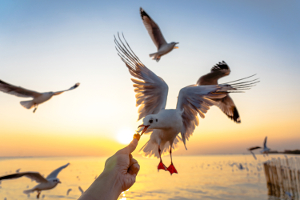 Birds will never turn down a free meal. They’ll gobble up anything they can find, which is a problem for anyone growing fruit and veg outdoors. It’s common for birds to take one or two pecks at a piece of fruit on a tree, only for that fruit to fall to the ground. When this happens, the hungry bird will simply pick out another piece of fruit – and then another, and another, and so on until they’ve had their fill. What this means is that a whole tree’s worth of fruit can quickly be contaminated by just a few birds as just one bird will peck at many fruits.

Birds aren’t naturally aggressive animals but they’re not always shy about human contact. Some species (especially seagulls) can be very over-protective when they’re raising chicks! This means they can and will attack if they think you’re a threat to their nest. This is rare, but it does happen. What’s more common is for people to get startled by birds and injure themselves in a panic, so it makes sense to keep these more adventurous birds at bay!

What Can I Do About My Bird Problem?

Despite all the problems they cause, birds are a vital part of our ecosystem. This means they’re protected by law in the UK and you’re only allowed to have them removed in very specific circumstances – for example if they’re a real threat to life. What you can do, however, is to take a few steps to deter them from your property in the first place! 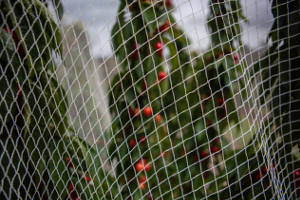 Sometimes, the simplest solutions are the best! Netting is a great way to stop birds from pecking at your prize fruit and veg; it acts as a barrier to stop birds from getting where they shouldn’t! You can drape it over plants or fasten it to a frame to keep birds away from sensitive stonework or wood.

Our bird netting is strong and durable, meaning birds won’t be able to tear holes in it. Unlike other netting, it’s also chemically inert and UV resistant, meaning it doesn’t disintegrate when it’s left in direct sunlight.

Our netting is available in two different mesh sizes. It’s important to pick the right one; if the mesh size is too big, the target bird will be able to peck through the gaps. If it’s too small, larger birds will easily be able to walk across it. We stock 50mm mesh for pigeons and 75mm mesh for seagulls. 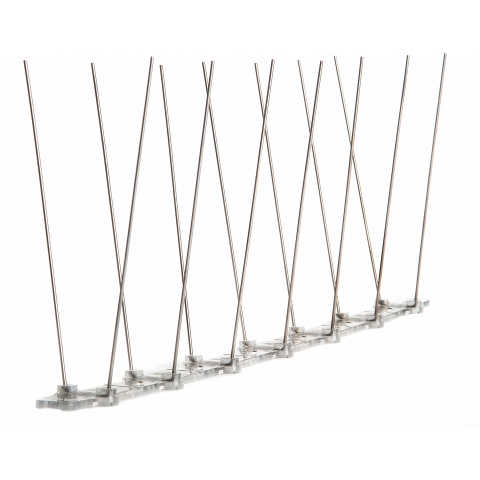 Spikes look quite intimidating, but they’re quite a humane bird deterrent and are recommended by the RSPB. They don’t actually harm the birds; they just make the surface they’re installed on impossible to land on for larger birds (like pigeons and gulls). If a bird can’t land on your roof, they’re much, much less likely to leave droppings up there, so your property stays as clean and hygienic as possible.

Note that smaller birds (like sparrows) may still be able to land in between the spikes and cling to the sides of them. However, these birds are smaller and rarely gather in large enough groups to be a problem.